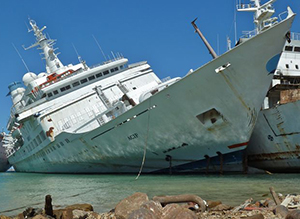 The deaths of two maritime workers at a ship scrapping yard in Izmir, Turkey in August made headlines around the world, not because it was yet another deadly incident in the notoriously dangerous ship demolition industry but because of the history of the cruise ship the men were scrapping.

Turkish authorities have launched an investigation into the incident in the flooded engine room of the MS Pacific, a leisure liner made famous for its role as the titular "Love Boat" in the hit ABC TV series that aired from 1977 to 1986.

Small by today’s standards at just 554 feet in length, the vessel, originally called the Pacific Princess was sold to a Spanish company in 2002, and renamed the MS Pacific.

The iconic leisure cruise liner was set for a refit in the Italian port of Genoa in 2008 but it was seized by Italian authorities after its Spanish owners abandoned the vessel. The MS Pacific was then sold for scrap in 2012 and towed to Turkey.

It was during its Mediterranean crossing to Izmir, Turkey, that the MS Pacific suffered severe flooding due to high seas. Before the Izmir Ship Recycling Co. could begin dismantling the cruise ship for scrap, diesel-powered pumping equipment was brought in to pump water out of the vessel’s flooded engine room.

The probe into the accident may look at why ten men happened to be in an enclosed engine room while exhaust-spewing pumping equipment was in operation. All ten men were rushed to a hospital suffering from exhaust inhalation. Eight men recovered, while two men, Doğan Balcı (37) and Davut Özdemir (40), died.

The investigation may also query an allegation made by relatives of one of the deceased men that he did not receive proper medical treatment for alleged Freon gas exposure two days prior and that this incident played a role in the man’s death.

A Turkish newspaper, Today’s Zaman, quotes a relative of Balcı: "Doğan came over to our house on the second day of Eid and said he had been exposed to poison at work along with three others. However, they were given a yogurt drink by their employer instead of being taken to a hospital."

Freon gas is a refrigerant used in refrigerators and air conditioning systems. Inhalation can impair the proper functioning of the heart and lungs. If both men were exposed to Freon, this earlier incident could explain why out of the ten men that suffered exhaust inhalation in the flooded engine room, it was these two men that died.

Turkey scraps about 400 vessels a year, and is responsible for 23 percent of worldwide maritime demolition activity. The ship demolition business is infamous for lax health and safety procedures that cost the lives of scores of workers every year and injures many more.