Having to hire a lawyer to sort out a legal problem or to get the recourse you deserve can be a stressful and confusing experience. Fortunately, looking for the right lawyer can be much easier if you understand what your legal problem requires.

First and foremost, the lawyer you choose must have experience in the type of legal problem you are experiencing. In addition, he or she must be licensed to practice in the location where you can legally file a case (or where you must defend yourself). For example, if you are a seafarer who has a grievance against the cruise ship company you work for, and the company is headquartered in Miami, FL, then you must retain a maritime lawyer who is licensed to practice in the state of Florida.

Once you have decided that you need professional legal help, you should act quickly because legal cases must be filed within a designated time period. Upon hiring a lawyer, he should:

For many plaintiffs and defendants, lawyer fees can seem like an insurmountable obstacle when it comes to finding competent yet affordable legal representation. A solution to this problem is the “contingency fee”. This means that you only pay if you win your case. In this type of arrangement, the lawyers collect a percentage of the amount awarded.

Some law firms offer a flat or fixed fee option should your case be relatively simple and straightforward. In general, attorneys charge by the hour, which can vary based on the lawyer’s reputation and skill. Most lawyers will demand a “retainer” which is an advance payment against future charges. Any billable work that exceeds the retainer has to be paid by the client as well. Some countries have a statutory fee, which means that you must pay a set amount as specified by statute or by the regional court.

Sometimes, the lawyer with the right skill set to represent you will not work on contingency or fixed fee and only charges by the hour. Today, many skilled lawyers are willing to make other payment arrangements, such as monthly payments or other types of financing.

Hiring a lawyer is a very serious affair, but it does not have to be an intimidating or confusing process. No matter which lawyer you choose or what type of attorney you need, the best lawyer to hire is the one who listens, is honest and ethical about the progress of your case, and will give you the attention you deserve.

Fortunately for crew members that are injured or become sick aboard American cruise and cargo ships, the American maritime attorneys that handle these cases work on a percentage.  This means that the crew member does not have to pay his lawyer any money until he receives money compensation for his injuries or sickness from the cruise or cargo company. 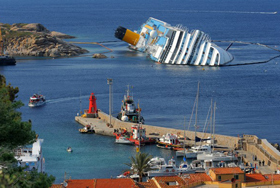 It is generally understood that the captain is the ultimate authority of any vessel, and is expected by the general public to put the well-being of his or her passengers first by being the last to leave a sinking ship. What made the Costa Concordia disaster so infamous was the fact that the ship’s captain, Francesco Schettino, chose to abandon ship and leave his passengers to their own devices.

But despite tradition and common practice, international maritime law has no fixed penalty for the cowardly and selfish act of abandoning ship. However, since the vessel was flying the Italian flag and sailing in Italian waters with an Italian captain, the jurisdiction lies under Italian maritime law—which means Captain Schettino can be prosecuted by the Italian government and sent to prison. Abandoning ship is still considered a maritime crime in Greece, Spain, and Italy, in contrast to other nations that have removed it from their books.

Where are maritime crimes prosecuted?

When incidents occur in international waters, obtaining complete investigations and prosecuting offenders can be difficult, since the efficacy of enforcement depends on the flag state of the ship. Many U.S. Corporation owned cruise ships sail under Panama or the Bahamas, so any incident that involves these ships would be investigated not by the U.S., but by Panama or the Bahamas. In addition, the vessel may be subject to the laws of any country where it docks.

Unfortunately, this left little recourse to American passengers who have gone missing or were victims of crimes at sea. As a result, many victims were forced to hire specialty maritime lawyers in Miami, Florida and file civil suits against cruise lines, which left little impact on international maritime law and enforcement. Finally in 2010, the International Cruise Victims Association lobbied Congress, resulting in the ratification of a new law compelling U.S. based cruise lines to report maritime crimes to the FBI.

Another concern highlighted by the Concordia disaster is the way modern cruise ships are built. Today, all active vessels are built according to the regulations specified by the Solas (Safety of Life at Sea) conventions, which are created and enforced by sovereign member states of the International Maritime Organization (IMO). All ships sailing through ports belonging to member states are subject to regular surveys and inspections, which should ensure widespread international safety compliance.

As they say, hindsight is always 20/20. There are concerns that the large size of the Concordia may have compromised cruise ship safety by making evacuation more prolonged and difficult. However, there were many factors that contributed to the Concordia disaster, such as: Captain Schettino’s questionable decision to sail without first conducting a safety drill; his alleged non-compliance of the established route; his neglect in issuing a mayday signal soon after the accident; his choice to abandon ship without warning the passengers; and his refusal to return to the ship to assist with rescue efforts.

According to Nautilus, the maritime professionals’ union, there needs to be a re-evaluation of current cruise ship safety guidelines. With last year’s sinking of the Concordia still fresh in people’s minds, many would-be cruise ship passengers are finding themselves in agreement with that assessment.

In response, IMO Secretary General Koji Sekimizu pledged to review the current regulations on large passenger ships: "We should seriously consider the lessons to be learnt and, if necessary, re-examine the regulations on the safety of large passenger ships in the light of the findings of the casualty investigation. In the centenary year of the Titanic, we have once again been reminded of the risks involved in maritime activities.”

According to the IMO’s interpretation of maritime law, all cruise ships must carry enough lifeboats for all passengers on board. But enough lifeboats aren’t much help if they are inaccessible during an emergency, as the doomed Concordia passengers found. Standard cruise ship safety regulations aside, it could be said that the biggest danger to a passenger’s well-being are ship and crew personnel that don’t care enough to follow established rules. Captain Schettino was found to be non-compliant of many standard safety procedures, which helped seal the fates of the unlucky passengers of his ship.

Precautions to take before embarking on an international cruise

Fortunately, maritime disasters like the Concordia are extremely rare. While passengers have no control over the skill and conscientiousness of their captain, there are still some measures they can take to ensure their safety. If you are an American citizen who wants to travel internationally, you can register with the Smart Traveler Enrollment Program (STEP) or go through the U.S. Embassy, which will make it easier for the State Department to help you during times of emergency.

Before travelling out of the country, it is a good idea to make a copy of your passport and store it electronically on a cloud drive, so you can access it anywhere with an internet connection. Always bring a bag with essentials, such as your prescription medication and toiletries. And once you board the ship, make sure to locate your life vest and attend the muster drill.

For everything that went wrong with the Concordia evacuation, it’s important to remember that the vast majority of the ship’s passengers were able to leave the ship safe and sound. Overall, cruise ships are still one of the safest vacation options travelers can choose—and as long as the cruise industry stays vigilant, there’s no reason for another Concordia type accident to happen again any time soon.